Indie games have become a phenomenon in the entertainment industry. They made it clear that absolutely anyone can become rich and famous only thanks to their skills and abilities. In this article, we will find out what is an indie game and what makes this kind of games so distinctive.

In this article, you’ll learn: hide
What Is an Indie Game?
Pros and Cons of Developing an Indie Game
AAA Game vs Indie Game: What’s the Difference?
How Much Does It Cost to Create an Indie Game?
The popularity of Indie Games
5 Most Popular Indie Games
Minecraft
Journey
Cuphead
Five Nights at Freddy’s
Letters: A Written Adventure
Over to You

What Is an Indie Game?

Indie games are computer games created by independent developers. A single person or a small team of 2 to 10 people can build such games from scratch. Sometimes indie games are referred to as “free” because game resources are either created by the developers themselves or taken from free sources.

Indie development emerged in the early 2000s but had little success because it was unrealistic to break into the game industry bypassing the big game platforms. The game world was regulated by companies like Sega, Nintendo, and others.

In 2004, the situation started to change, and the game market turned towards indie developers. The event that turned the market around was the creation of the Steam platform. It didn’t show explosive growth right away, but only after a few years. It is still the main place where indie games appear, and where you can actually learn what is an indie game.

The Steam platform gave a strong push to indie developers because it published games bypassing the big companies. There is an opinion that if not for the launch of Steam, indie development would not have been as popular as it is now. After all, thanks to Steam and similar platforms the games of single developers as well as small studios could see the light and show the world what is an indie game.

Pros and Cons of Developing an Indie Game

Indie development is a symbol of independence from game standards and daring ideas. This kind of development attracts newcomers who can barely code, as well as famous programmers who have worked in big game studios. An indie developer is a game developer who has their own opinion.

Here are the advantages of developing an indie game:

The key difference between an AAA game and an indie game is the budget and scale. Indie games tend to have a much smaller budget, more unique mechanics, shorter stories, and more stylized art. At the same time, AAA games are typically made by big companies, have lots of content, are built by using the latest graphics technology, involve large teams, and have a franchise attached to them.

Large companies specializing in the creation of computer games approach their projects globally. They expect millions of players, that’s why these games are very cinematic. Games from major publishers are made not by 1 or 10 people, but by thousands. Of course, such games are beautiful, but their price is high.

On the other hand, independent developers make the game for themselves, and therefore very often give them a strong personal character. Indie developers do not have the opportunity to create large and technological games, so they make games with unique gameplay. As a result, indie games are small in size, have low system requirements, and have extraordinary gameplay.

How Much Does It Cost to Create an Indie Game?

So what is an indie game budget? The development of such a game can actually cost a lot. According to Michael Crassweller, a senior product manager at Forward Game Studios, a $1 million budget for an indie game can be normal, and here’s why:

The popularity of Indie Games

In 2019, Valve published a report that shows the growing popularity of indie games among gamers and increased profits for their developers. According to the company, they wanted to change the opinion of the majority that the popularity of indie games is too small due to the constant releases of large-scale games for modern consoles and PC. The company believes that it was Steam that helped many indie game creators achieve success and excellent financial performance.

One of the published graphs showed the growth of games that had managed to earn more than $10,000 in the first two weeks after the release. In 2019, this figure increased by 18% compared to 2018. 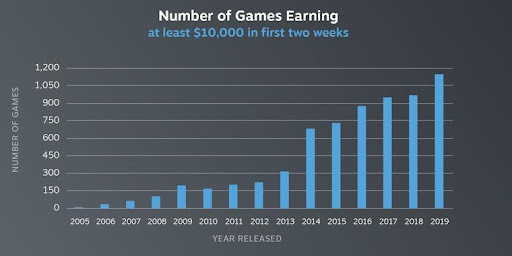 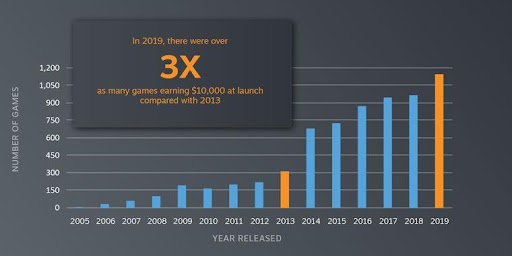 Indie games remain popular in 2022 as well. According to the Video Game Insights Report, in the first half of 2022, 6,015 new games were released on Steam, 5,895 of which were indie games. At the same time, 4 out of the 10 top-grossing games were indie releases: Core Keeper, Dread Hunger, Raft, and V Rising. 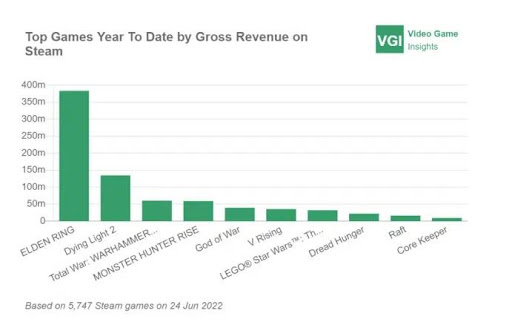 All this suggests that the popularity of indie games is constantly growing because gamers already know what is an indie game and are ready to pay for this type of games.

We have prepared a list of indie games that have become popular in recent years. 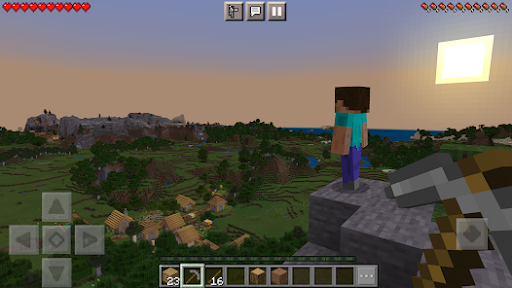 In 2021, it’s hard to call Minecraft an indie product, but it started its journey from this stage. This is a simple and at the same time incredibly deep game that satisfies one of the most important human needs – the need for self-realization.

In over ten years, Markus Persson’s project has grown from a curious idea into the best-selling game of all time and an unprecedented cultural phenomenon that has turned the industry upside down. Minecraft has achieved what many developers see only in a dream: absolutely anyone can play it – from preschoolers to retirees. And everyone will have the same fun, everyone will find something to their liking. Someone will build a cozy hut with a garden, others will arm themselves with diamond swords and go in search of adventure, and still, others will build a 1:1 scale replica of the Sistine Chapel or a working, programmable calculator. The only limit to creative freedom is your imagination. 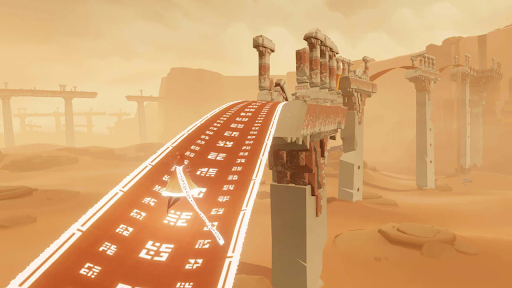 Released in 2012, this game doesn’t have a great story or deep mechanics; someone can even say that there is no gameplay as such in it. You simply wander towards a high mountain on the horizon – either alone or, when playing online, with the same nameless pilgrim.

The experience of playing Journey is unforgettable. Thanks to its excellent work with aesthetics and music, it makes you feel such sincere emotions that the line between the “game” and the real emotional experience is simply erased. Enthusiasm, fear, hope, despair – they are real. As well as the bonds that bind two strangers, united by a common goal: to reach the very end. 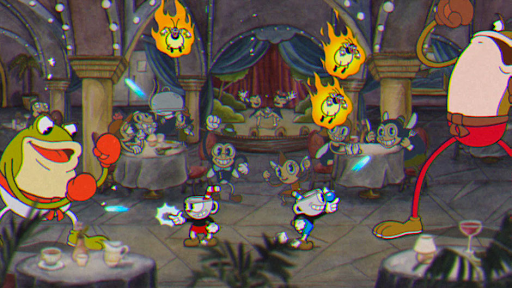 The authors of the game, Studio MDHR, do not just imitate vintage cartoons of the 1930s: their creation is drawn completely manually on paper and only then digitized. The developers also created impressive gameplay. They invested so much fantasy in each level that it would be enough for a dozen separate platformers, but Cuphead is one of a kind – and it is impossible not to fall in love with it. 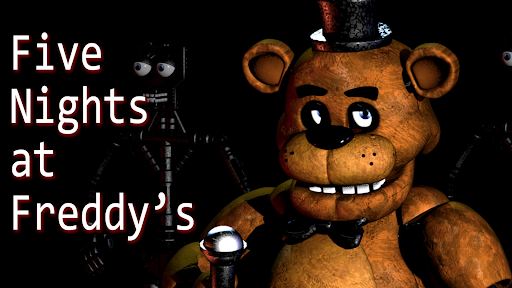 In 2014, the release of this game literally blew up the Internet. Everyone talked about it, every second video blogger played it. YouTube turned a small indie horror into a multi-million dollar franchise with sequels, spin-offs, and books based on them. Does the game deserve such success, or was it just lucky to come out at the right time? Both. Its creator, Scott Cawthon, grabbed the essence of horror and managed to present it in his own, unique way. 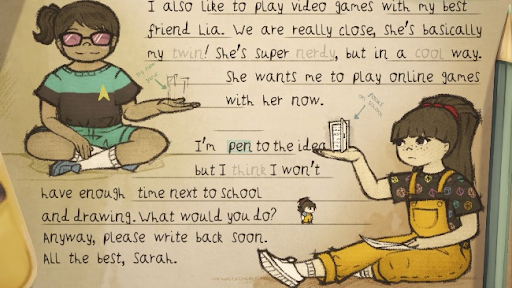 A text puzzle wrapped in a story about growing up. The story of the game starts in 1998: you get to know the main character by reading and copying her letters. The girl herself literally jumps along the lines of the letter (2D platformer), breaks words, changes the letters, and discusses with her pen pal how life is in Switzerland. Then the 2000s come, letters become electronic, social media appear, and the heroine faces a difficult choice – who to add as friends.

We hope that this article has shed some light on what is an indie game, what are its advantages over games by prominent publishers, and why is this type of games so popular.