We are taking a look at two important metrics (apart from engagement) that truly define a gaming app’s success in the market today and learn from Live examples implemented by Front Line Commando 2 and Trools Vs Vikings. This is a follow-up to some of our previous posts, where we spoke about how engagement is the real measure of the app’s monetization and have also reinstated the importance of developer to player communication.

Why did we previously cover engagement and communication topics, you ask?

Because the main objective of measuring your app’s metrics is to be able to understand how to grow faster in its target market. The numbers are aimed to assist you in understanding the market opportunities and make better decisions. Engagement for instance, is that one metric that will give you insights into what your players understand of the app and where there is still scope to improve their experience.

If you pay close attention to the top grossing apps, you will understand that they didn’t just focus on scaling their number of installs, they took time to create engagement strategies for their players. So unless you’re looking at short term growth and monetization goals, the number of installs your app has garnered, isn’t the only metric you should be looking at.

So what are the metrics a game developer should really care about?

Having seen games come into the mobile market and leaving it just a few days later, we determined the two most important metrics for them. The metrics that not only just focus on engagement and monetization from players, but also drive growth.

From Players To Payers

Smartphone users are always on the lookout for interesting apps. And they are more than willing to try out new games that get introduced to their store, as long as they seem promising.

If you marketed your app well, gathering your initial set of players will be catered for. Now converting these players into payers is a different ballgame altogether. Since you are building a game,  your app doesn’t provide a solution that addresses a critical ‘pain point’ in the user’s life. To convert these players you will need well crafted tactics.

Don’t just count on the number of installs your app is generating. Take a look at the number of players who are willing to make a bigger commitment to your app – turn those players into paying users.

How do you turn your players into payers?

For instance, Frontline Commando 2 has personalized its in-app purchase promotions as per the player’s progress in the app. It takes into consideration the challenges that players might have in specific episodes and suggests purchases accordingly. This makes players more likely to convert on the recommendations, since they are shown in the moments players need they the most!

From Players To Promoters

A successful app doesn’t end its monetization strategy at converting a player into a paying customer. It focuses on how they can keep this customer engaged, guarantee their loyalty to the game and leverage the power of word-of-mouth.

Any highly engaged player is sure to have a good experience with the game. And if he is is happy with his experience, he is more likely to invite his friends or family to join in too. This is the one instance that a developer needs to track closely: players that can be converted into promoters.

You might have a few users that recommend your app in their circles every once in a while. But there could be those who are a lot more aggressive at it – the promoters or advocates for your game. Hence, this is a metric that should play an important role in your word-of-mouth marketing strategy.

Here are a few things you need to keep in mind:

Here is an example of a campaign that identifies highly engaged users in your game, and shows them an in-app promotion that nudges them into promoting your game: Trolls Vs Vikings makes use of Smart Invites to encourage its paying engaged players to further advocate their app. It lets them invite their friends using a personalized message and common chat apps like Whatsapp, Kik, etc. 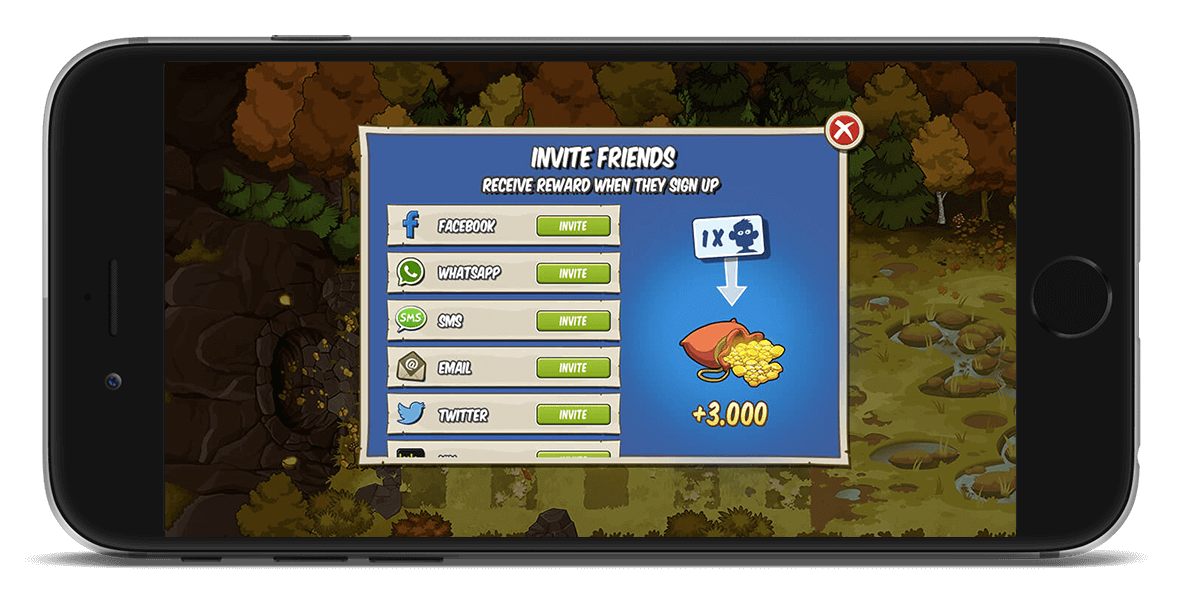 The gaming market is currently booming and if you have a game that is getting released in a few days, you need to ensure it stays long enough in the market to engage users and monetize your efforts.

Make it your prime goal to enhance the player’s experience as well as keep him highly involved throughout the app. The longer he remains interested in the game, the higher are the chances of him proceeding to a level that requires him to convert. Highly engaged players are also more likely to invite their friends and family to the app in favor of incentives.

Have you tapped into the power of these metrics for your game yet?