Acquiring users for your app is a herculean task these days and the holiday season makes it no easier. Just as you think you could take some time off from work, you see the study on Think With Google that says it is the time you need to focus on for app growth! Well, if you’re in the same boat, here’s are a few tips to get set for more downloads this festive season.

According to Think With Google, the holiday season drives more app downloads than any other time of the year. And since you aren’t the only to have come across the post, there’s certainly going to be a whole lot of competition you need to beat as apps across different industries gear up with their campaigns.

Too worried about the competition? No need to.

GetSocial has some app marketing tips that will give ensure you don’t end up losing your target market to competitors and that you are able to sustain your app’s growth, even during the holiday season.

1. Work on your app’s discoverability

According to statistics shared on Fiksu, the app store traffic is all set to increase this month. It also states that the traffic will remain at a high even after the holiday season, as people start to experiment with the mobile devices that have been purchased by them or gifted to them. Pretty obvious right? 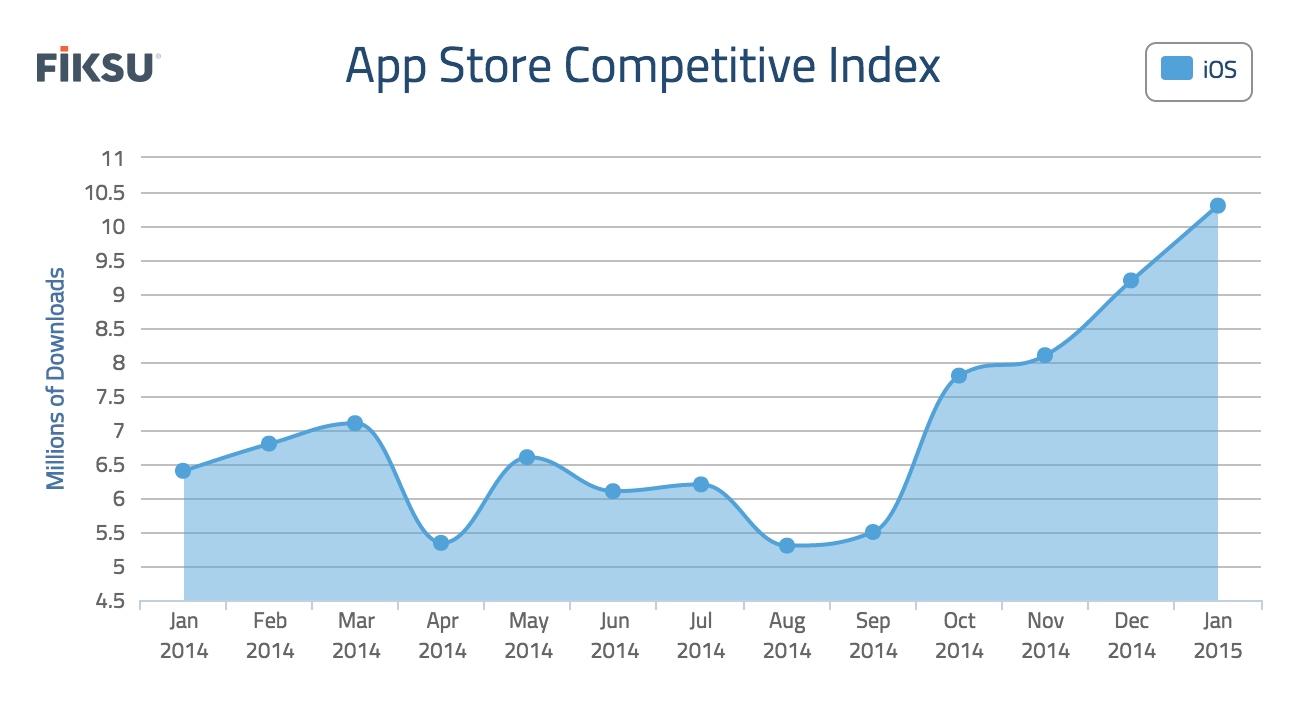 That is why the very first thing you need to do is work on your app’s discoverability in the stores during this season. You want to remain in the limelight and not lose your users to all the new apps that enter the market every other day.

Focus on the ASO of your app, if you haven’t already optimized it, to join in the festivities with your users. Since they’re going to be looking for holiday deals or holiday season special features on the store, you want to rank in their search results and draw their attention.

A few things that we think you should change right away on your store include: 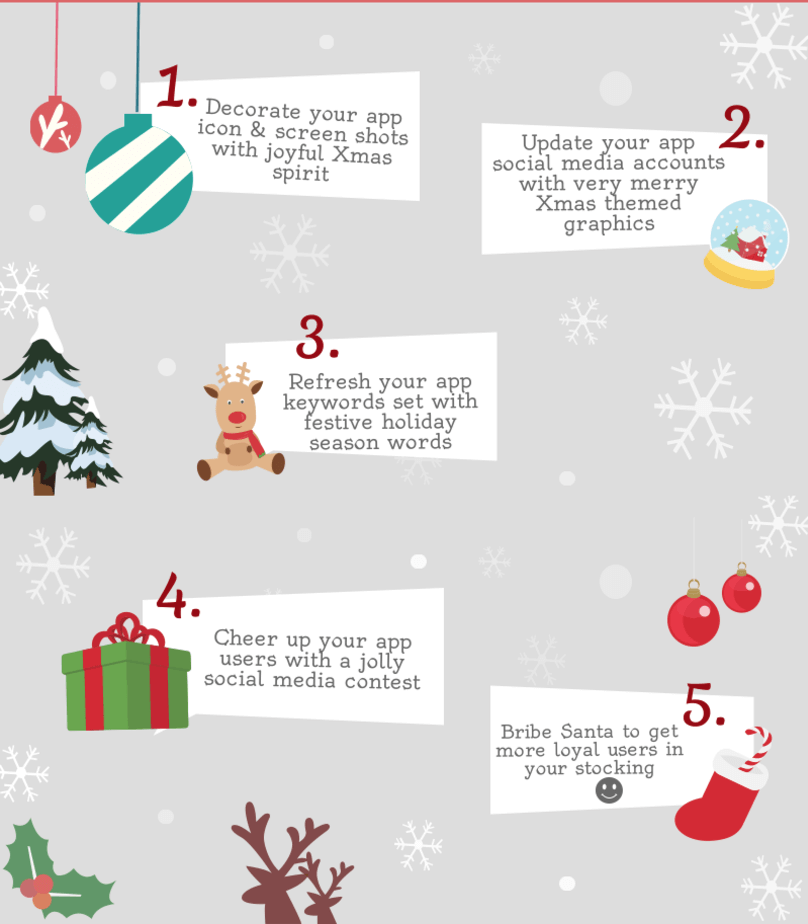 2. Go ahead and experiment with your advertisements

Most apps have an advertisement or two running on an ongoing basis to acquire new users or retarget those who have previously shown interest in it. With the holiday season coming in, it is time to tweak your ads – not just the copies, but also the timings that you have been running them on.

The average time spent on mobile devices increases exponentially right before, during and after the holiday season. This presents marketers with the opportunity to push forward their value propositions time and again in front of their target users, to make them more likely to be clicked.

Some of the things we think you should keep in mind for advertisements include:

In your zeal to acquire new users, don’t forget about your existing ones. Just like people are more open to trying out new apps this season, the old ones too are spending time on digital platforms exploring the options you have. You need to make sure that you’re not losing the users you have already acquired just because none of your campaigns focused on engaging them at the right time.

Find ways to touch base with your users consistently.

A few ways to keep your users thoroughly engaged with your app and not abandon you this season are:

For instance, here’s how Magazine apps could use push notifications now. 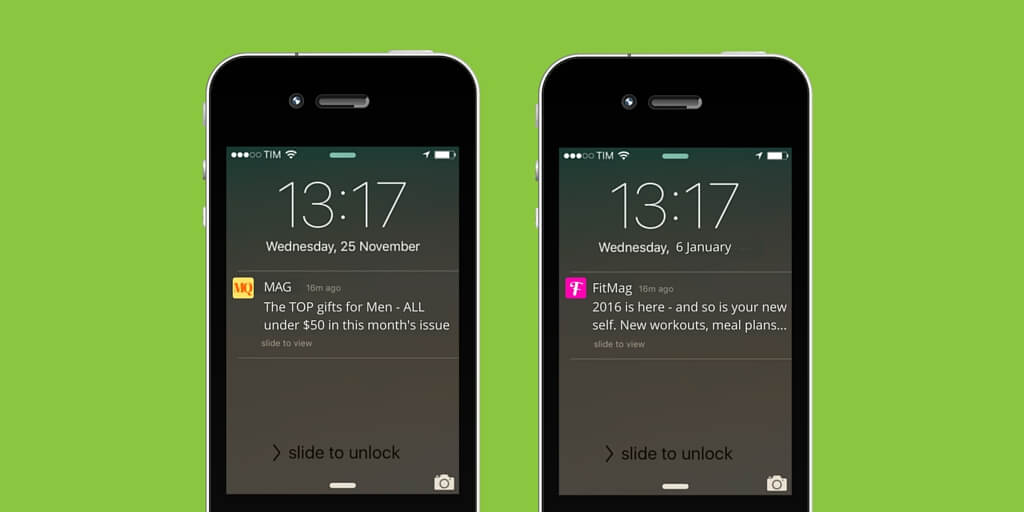 While users are more than willing to try out new apps this season, they are also seeking for what they can get best – for free or for a price that they think is affordable. This is where it becomes difficult for apps to monetize during the holidays. They always have the fear of being replaced by something free or something cheaper!

This is why it is important to customize your monetization strategy for the holiday season. Don’t just focus on in-app monetization, but also promote those paid features for app growth.

We listed down 10 in-app monetization strategies that will guarantee you higher revenues and engaged users in our previous post. But here’s a summary of what you need to have in place right now:

The best way to get more users and keep the existing ones engaged? Localization! Creating campaigns in and around users is the best way to grab their attention and drive them towards an action you need them to take.

From push notifications to social media campaigns, make sure that the messages you use to promote your app are as localised as possible. This increases the relatability of your campaigns and gets higher conversion rates on them.

Here are a few pointers to keep in mind: 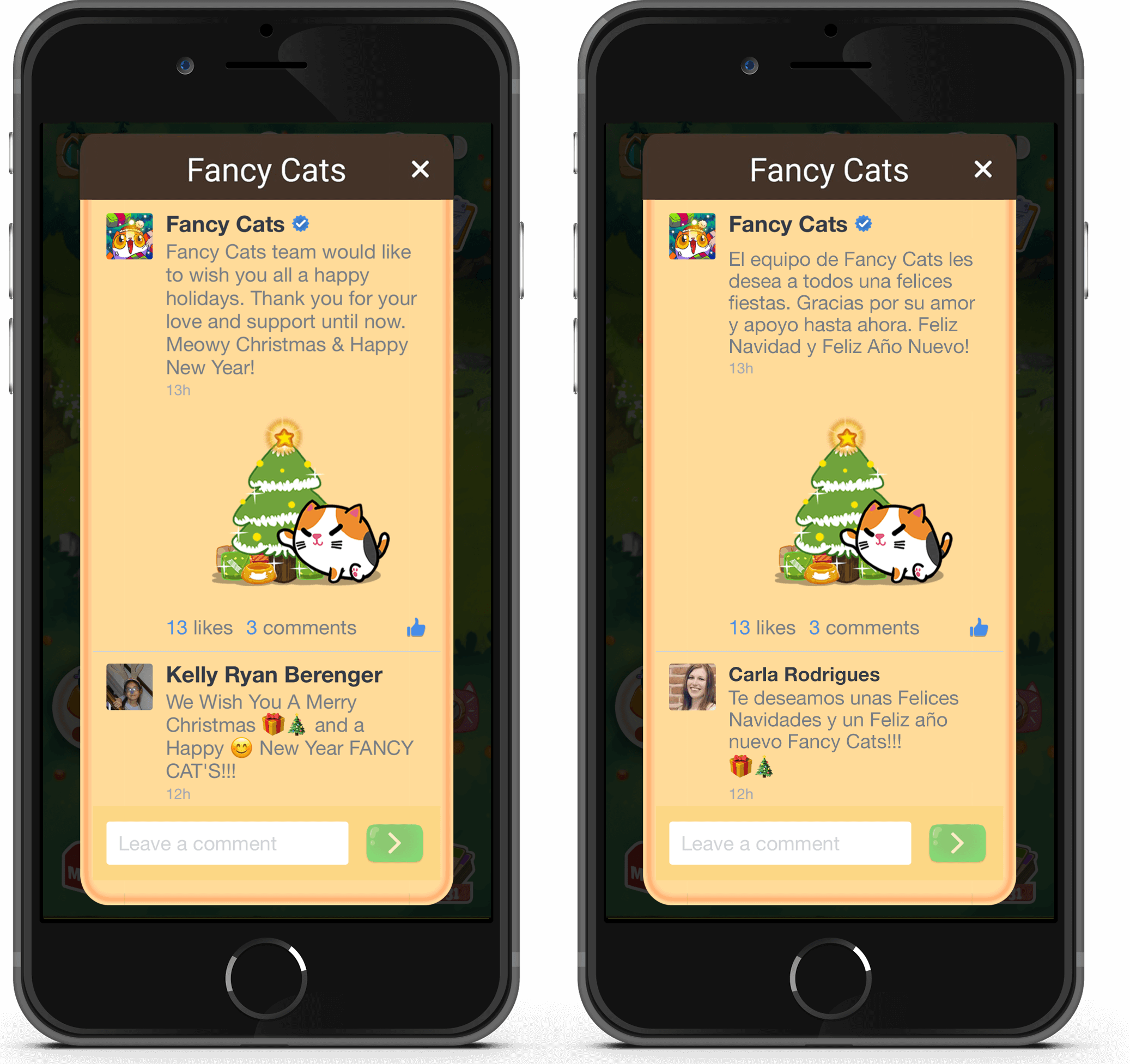 Holiday season offers the perfect opportunity for apps to grow their user base. It lets you become a part of users’ break time, get them so engaged with the app that they are willing to make a bigger commitment (convert) and turn them into loyal users.

If you focus on user acquisition and engagement, side-by-side, you’ll be in the holiday mood even after the season is over!

What other tips do you have for apps to get set for the holiday season?