Idle games, also known as incremental games, are games that are played “on their own,” reducing the player’s participation to the simplest set of actions. These games first appeared for PC under the name of “clickers” – players needed to click the mouse buttons to accelerate the earning of game currency.

You may confuse idle games with hyper-casual games, but idle games require even less user input than hyper-casual ones, and the mechanics are even simpler. At a certain moment, it becomes unprofitable to “click” or “tap” the currency in an idle game, so upgrades come to the rescue, allowing you to automatically generate profits. As a result, the player returns to the idle game after a while and rejoices at the “money” they earned. After that, they immediately spend their earnings on improvements that will allow them to generate even more profit, and so on.

Idle games represent an endless economic cycle in which the player earns resources, buys improvements, and begins to earn even more resources. Moreover, each next upgrade is more expensive for the player than the previous one. The central element of incremental games is often the accumulation of resources that do not require active actions from the player’s side.

In his article series about idle games, game designer Alexander King mentions that these games contain at least two psychology-related aspects: the “Skinner Box” and “accumulation desire vs. loss aversion.”

The first aspect is named after the behaviorist B. F. Skinner who conducted experiments on animals, giving them rewards for certain actions. The mechanics of incremental games are similar to the mechanics of this experiment.

The second aspect is also related to the game mechanics. While the game currency goes up even when the player is idle, it reduces the anxiety caused by loss aversion, i.e. by the fact that the currency will go away.

Why Are Idle Games So Popular?

Idle games are relaxing and meditative, but at the same time, they awaken excitement in players and create illusory needs. Idles attract their users not only with the gameplay itself but also with the joy that the players get when they return to the game over and over again, collecting the rewards.

Despite its seeming simplicity, a typical incremental game is perfectly mathematically calculated. It has eye-pleasing graphics and well-placed pleasure points. Such games break all the laws of “correct” game design and have their own rules. With all this, they remain the most common “time killers”.

According to Alexander King, moving to mobile was one of the biggest sources of idle games’ popularity. The two most popular games of this genre, AdVenture Capitalist and Clicker Heroes went mobile in 2014 and 2015, accordingly, and reached a greater number of downloads in the app stores than on Steam.

The costs that you would spend on developing an incremental game depend on the design, concept complexity, the size of the development team, and its location. For example, the team for a simple “clicker” (or, in the case of mobile, “tapper”) can consist of 5 people: game designer, 2D designer, sound designer, Unity developer, and story writer. The development process for such a game can last two months and would cost you between $5K and $10K.

But if we take a more complex game, the number of specialists per position in your team can grow – you may need several 2D designers, Unity developers, and so on. Accordingly, the development time can increase to about 3 to 6 months and would cost you between $20K and $40K.

Now let’s talk about how to make an idle game. We will find out which stages your idea should go through until it becomes a ready-made product and what important points you should consider at each stage.

Like any other mobile game, an idle game should have a concept. The main idea of any idle game is to build or collect stuff, so you should define at least what your player should collect or build, and in which setting they should do that. For example, in Idle Miner Tycoon by Kolibri Games, you need to dig a mine whereas in Tap Titans 2 you need to kill monsters.

Try to think of an innovative idea and not repeat the concepts of other games. For example, Nate Barker of Kolibri Games explains that they reversed the most popular format of idle games – tower building. In their Idle Miner Tycoon, the user needs to dig instead of building upwards.

At this stage, the development team creates a simple working version of the game – a prototype. The purpose of the prototype is to evaluate the game mechanics and various technical moments. The stage also involves the choice of the platforms, e.g. Steam, iOS, Android, and the game engine – for most incremental games, it is Unity.

The prototype will show you how viable your future game is and how interesting it will be to the end-user. At the same time, the prototype should be as simple as possible. It is enough to have only basic features as well as only one level or location. The prototype of Idle Miner Tycoon did not contain any 3D artwork, monetization models, social features, localization, etc.

This stage involves the creation of all content that is necessary for the beta version: graphical resources (artwork), core mechanics (tap and wait), and core game loop (e.g. collect something – upgrade – collect more). Nate of Kolibri Games recommends showing the core loop on one screen only – for Idle Miner Tycoon, it’s “mine – transport – sell – upgrade.” By upgrading, the user can mine more resources, transport them faster, sell them for more, etc. It will take the user minutes to go through the entire loop.

Check out a case study on how Idle miner Tycoon saw a 306% lift in invites sent and a 364% increase in installs generated with GetSocial Smart Invites.

At this stage, companies ask their team members as well as loyal users and friends to beta test the game and report any bugs before making the game public. The game already contains all of the key features so it is easy to spot something critical before the game sees the world, even as a beta version.

Soft launch, or open beta testing, refers to releasing the beta version to a wider audience. The game must be ready to receive a lot of traffic and accept payments. At this stage, the development of new features is completed. A feature freeze occurs, the programmers stop developing something new and switch to debugging and tweaking the existing features. Game designers, producers, and analysts draw conclusions from the statistics collected during the closed beta testing and check the efficiency of monetization.

Read more: Soft Launch Strategy: What It Is and Why Your App Needs It

At the release stage, the game developers set up the technical support, follow the marketing and financial plans, improve financial performance, and get the most out of the traffic driving channels. The purpose of the release is to make money and evaluate how profitable the game is according to the LTV (lifetime value) criterion. Specifically, the LTV should be greater than the CPI (cost per install).

We have already mentioned some of the most popular idle games in this article. Now we are going to talk more about those games as well as give you more examples.

Developed by Playsaurus, an indie game development studio based in California, Clicker Heroes is a free to play clicker game with an optional small payment option. Its desktop version was published in 2014, with the mobile version following in 2015.

The player sees one opponent at a time. Clicking the opponent will inflict damage to them until their health drops below zero and they die. After an enemy dies, they drop some gold that can be used to buy and upgrade heroes. After the player buys the hero, they increase the amount of damage that they can do to their opponents. 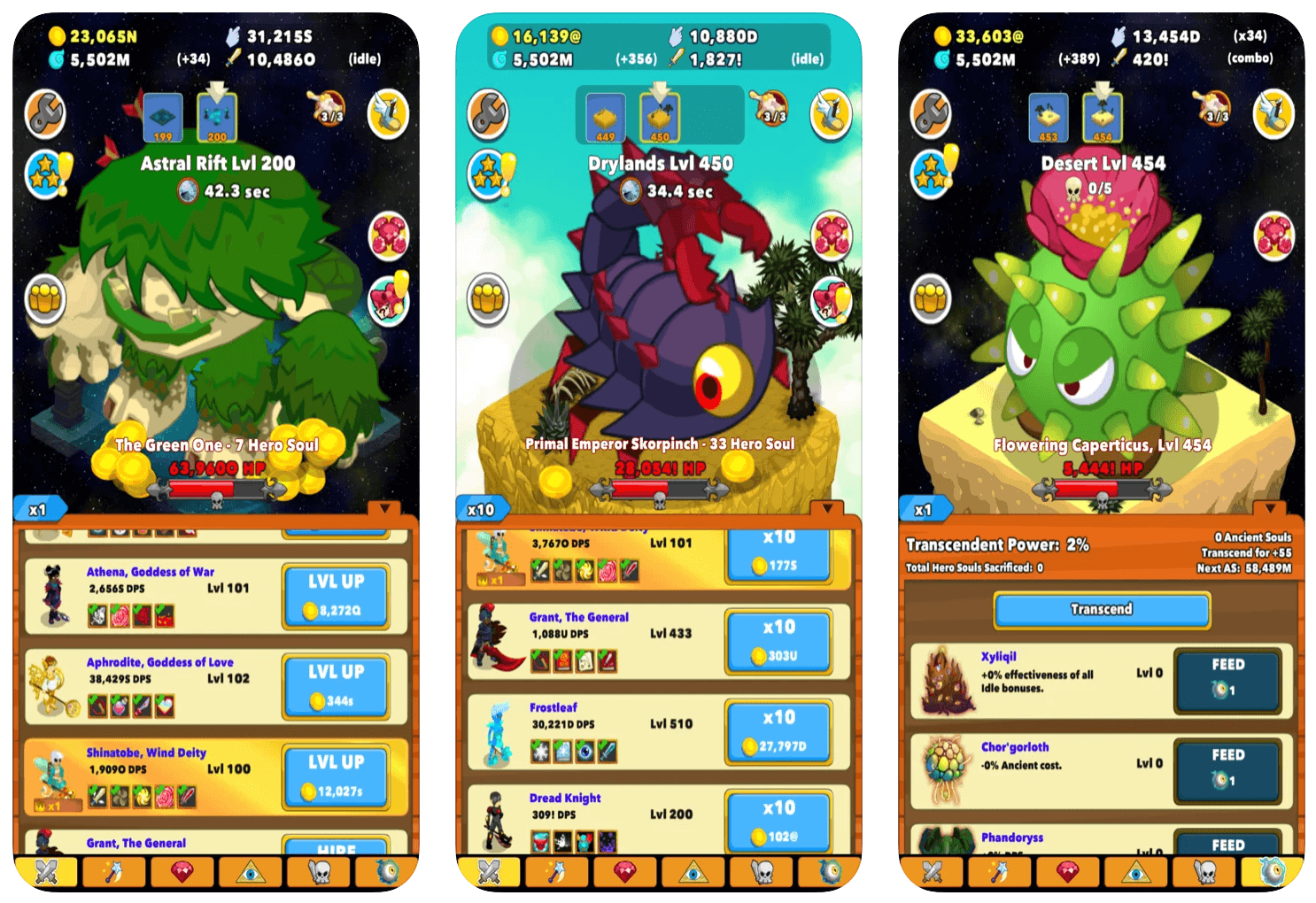 Clicker Heroes received mixed to positive reviews. The US magazine Kotaku described the game as the “perfect distraction in the office” and “immensely compact productivity killer. Rock, Paper, Shotgun praised the visual and acoustic presentation of the game and recognized the addiction potential for certain types of players. The Gamezebo portal, which specializes in mobile games, reported that Clicker Heroes has a medium game depth within the genre. Although it is more complex than it initially appears, it cannot keep up with modern clicker games that have the features of role-playing games such as character development or quests. The magazine also mentioned that, within the limits of the genre, it was fun to beat up the large and colorful opponents in Clicker Heroes.

This game was created in 2013 by French programmer Julien “Orteil” Thiennot. In 2019, the beta version for Android was released. The game is based on active clicking or tapping on the display. A giant cookie is located in the center of the display, and you need to press it very actively because from each press you will get one more such cookie. That is, if you press three to four times a second, you can get a bunch of cookies in just a minute of active play. But this is just an illusion – you can improve your parameters and then the influx of cookies will be much greater. 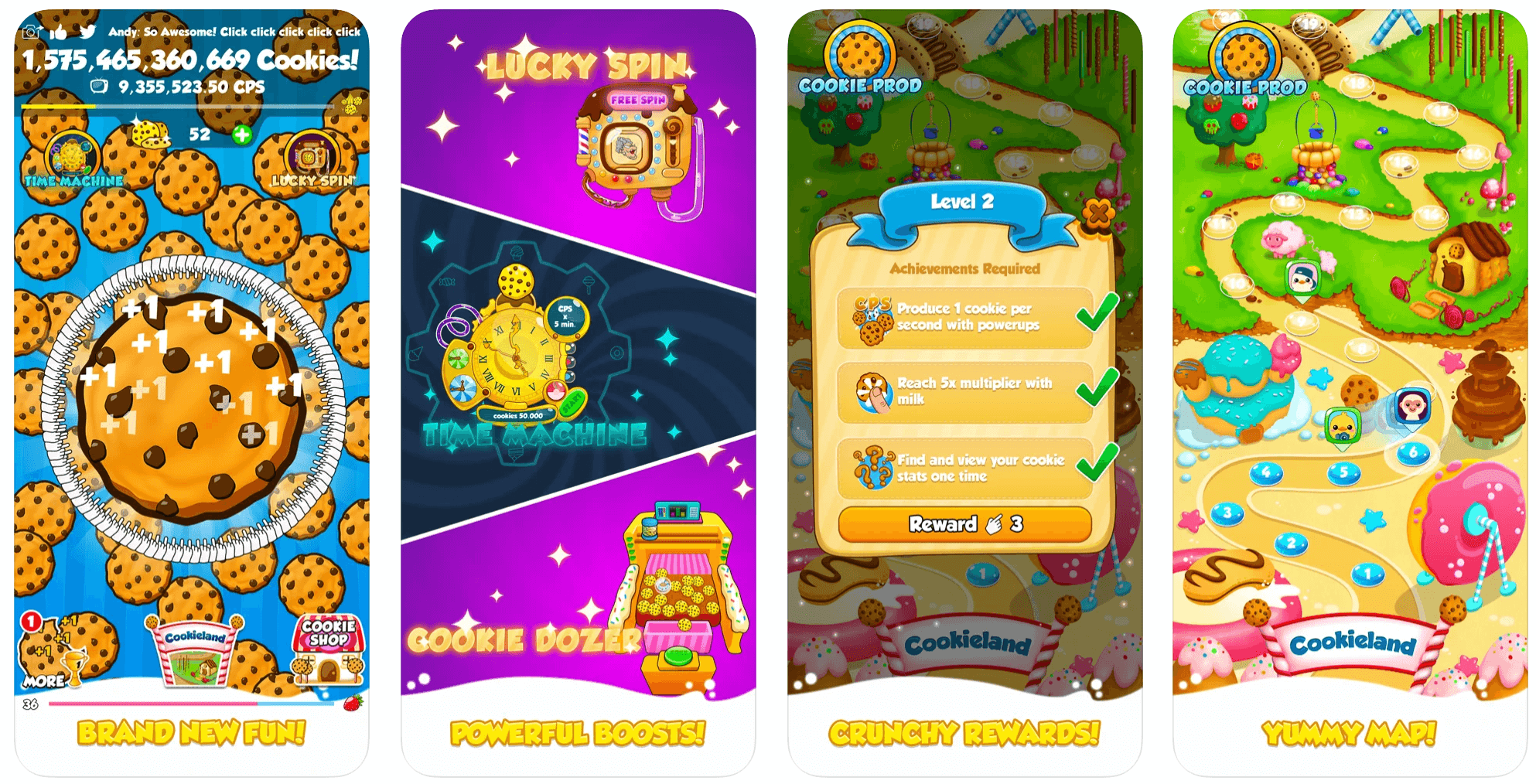 When you gain a decent supply of cookies, you can already improve not only the tap but also the secondary characters that bring additional profit. For example, you can hire old ladies, bakers, or even robots. They bring the so-called passive income – you do not even need to tap on the display, and the cookies will just fall into your pockets. This is useful because you are not always in the game and while you are offline these characters will be bringing you profit. Upon arrival in the game, you will notice a whole load of cookies that you can spend on new improvements and characters.

This game has an interesting history. The developer Jan Bogost explained in his blog that the game was the result of a controversy between creators of conventional games and those in the social media niche. The game was first social media-based and called Cow Clicker. The mobile version has the name Cow Evolution. 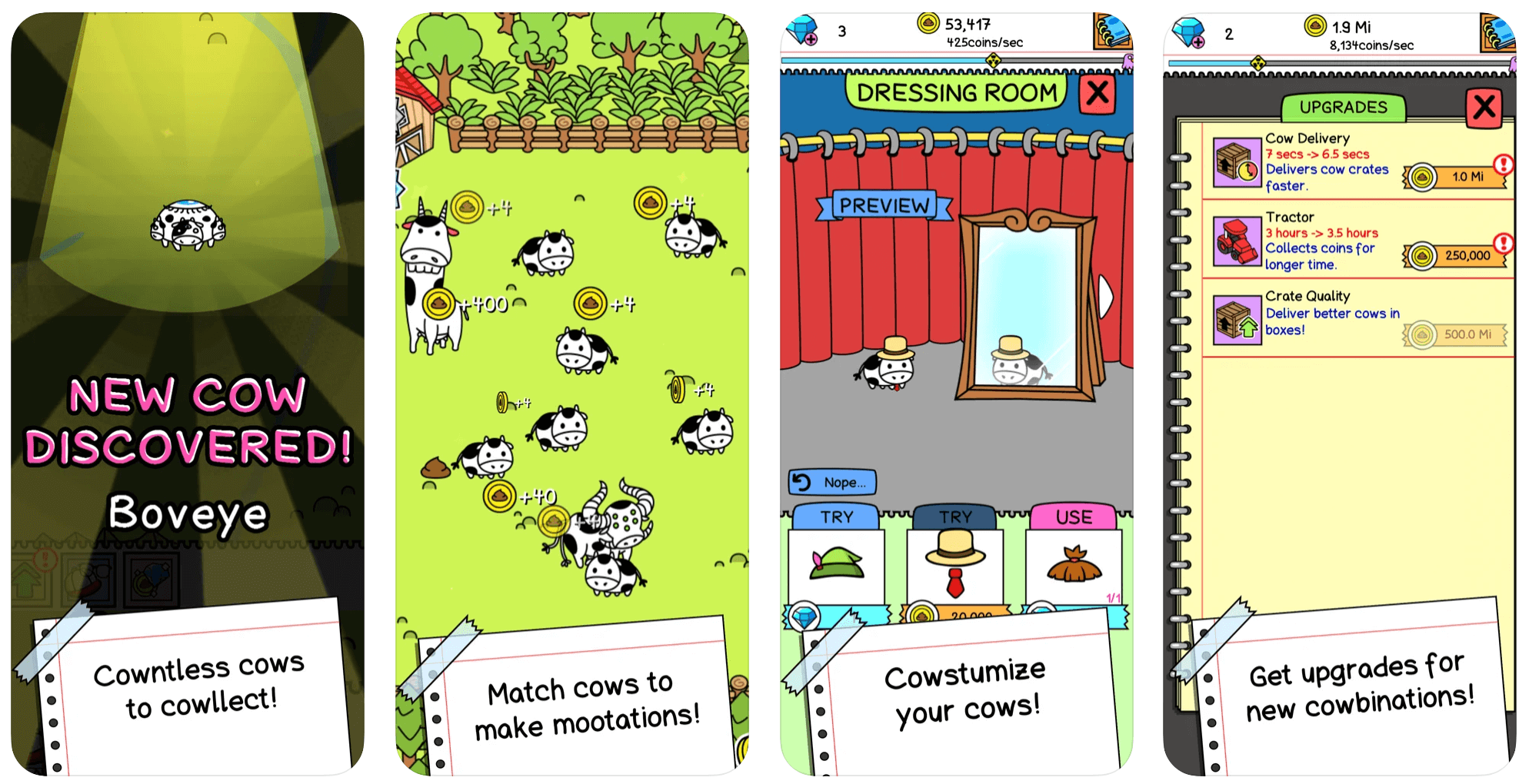 Each player gets a cow and must click on it every six hours. To get the right to click more often, the user can buy additional credits with money. The social element is implemented through neighboring cows, which can be controlled by the users you invite. If you have neighbors, then your click is also added to their rating. It is also possible to merge cows and combine them on a different scale, creating even the giant mutant cows.

How to Promote Idle Games: Checklist

Strategies to promote and market mobile idle games depend on the app development stage.

Check out our email course to learn more about promoting your mobile game.

Despite the seeming simplicity, the creation of idle games requires thorough mathematical calculations. The key task of idle game development companies is to get the most out of this simplicity by applying correct promotion and monetization strategies.

How to Categorize Games? 5 Most Popular Mobile Game Types