App invites serve as one of the most effective, personalized, and trusted way for mobile app developers to acquire users. It’s a well-known fact that the modern smartphone user needs more social proof before considering to download an app. But when a family or friend recommends an app, the same user tends not to think twice before installing the app.

If you go by numbers, 92% of people trust referrals from people they know! But that’s not all. A referred user’s lifetime value is 16% higher than that of non-referrals. Referrals, therefore, continue to be the app developer’s best friend for consistent growth. That’s where some have been relying on Firebase to fuel their referral programs. But with Firebase discontinuing the Invites feature, what are your options?

Firebase invites have worked relatively well, enabling users to share the invite link via SMS or email by utilizing the underlying Firebase Dynamic Links technology. This has been a better alternative since Facebook deprecated their invites technology. However, Firebase invites are limited to sharing on SMS and email whereas the growth of messaging apps like WhatsApp, Instagram, Facebook Messenger, etc has been a driving force for referrals as seen by the case study from Sega. This is validated by Google as they saw the Firebase invite usage significantly dropped, and as such, they decided to deprecate this feature.

Firebase recently announced that on January 24, 2020, it will completely disable the Firebase invite feature. Users, from there on, will not be able to send or receive Firebase Invites. In doing so, they will receive an ‘error’ message from the backend.

Even though the Firebase invites usage has dropped, referrals are still popular. And, all this doesn’t spell the end of referral marketing. To keep reaping the benefits of referrals, all you need to do is look for smarter alternatives available – before your referral program dies.

While usage of Firebase Invites dropped, many developers are still using Firebase Dynamic Links for their user-to-user sharing solution. This is the quickest alternative since app developers will already be familiar with creating dynamic links as it’s similar to how they set up Firebase Invites. However, some of the  common drawbacks here are:

Branch Metrics is another platform that offers apps an advanced deep linking solution which could be used for referrals. Its core features include:

However, app developers will find it very similar to Firebase dynamic links and will encounter similar drawbacks as stated above.

For an in-depth comparison of features offered by alternatives, also read: Deep link battle – Branch vs Firebase vs GetSocial

Keep the magic of referrals alive by switching from Firebase to GetSocial.

Alongside fueling social sharing of your invites, GetSocial Smart Invites also enables your users to share in-app content or invite with their friends and family, in a seamless manner. But that’s not all, you get to send these invites over all the channels that the millennial user is active on – right from chat apps like WhatsApp, Facebook Messenger, Kik, Kakao, to email and SMS, you get to take your referral program beyond social channels.

UbiSoft’s Face Up Social Game makes use of Smart Invites to acquire more users every day, with a simple five-step process, that can be completed in less than five minutes. Here’s a representation of how: 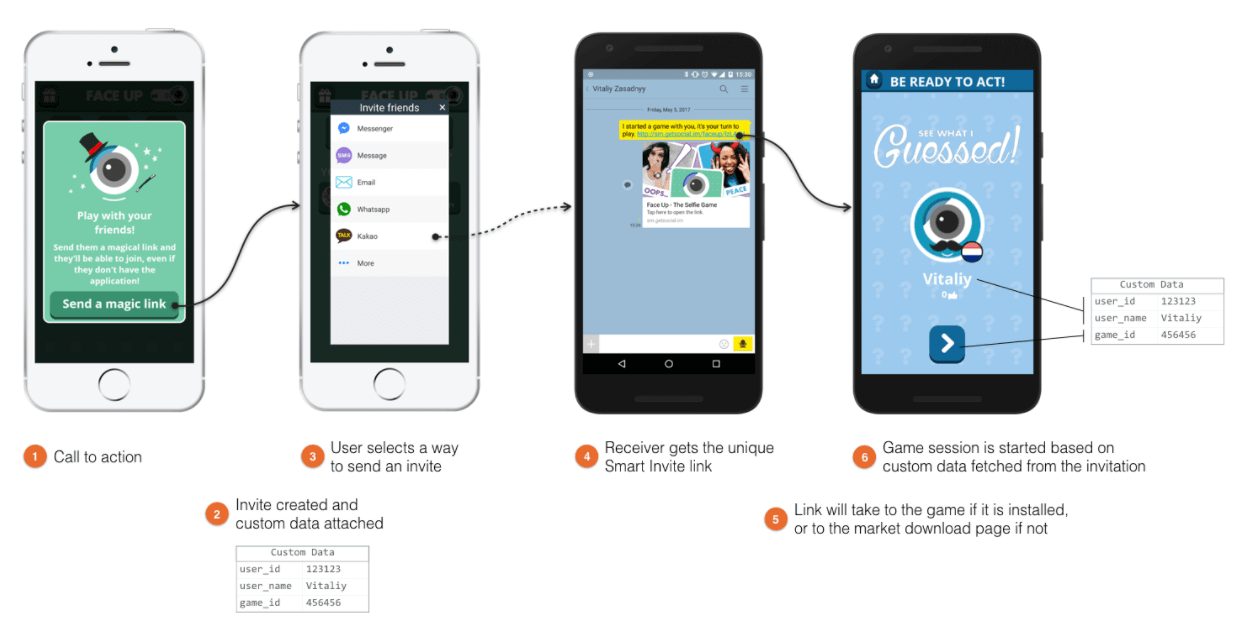 For PocApp’s game Castle Cats, Smart Invites has led to 25% conversions. Not just that! The game has also witnessed a 2.5X increase in the D30 retention rates for referred users.

The examples above give a clear picture of how GetSocial positively impacts some of your macro goals. Let’s also take a look at some other advantages of using GetSocial smart invites for fueling your app growth:

Allows you to store data and information about the sender and receiver of an invite, the channel used for sending the invite, and other custom data. Using these insights you can develop a personalized app onboarding experience for your users.

Rewarding users for inviting friends is a great way to boost your user base grow, but basics rewarding for the install is prone to fraud. Users who want to take advantage of it, may reinstall application multiple times or reset device IDs. GetSocial Smart Flows enable you to delay rewarding of the user to the moment when an invited friend will perform the desired action in the application. This way you reward users not for installs but for actual use of the application.

Smart invites make use of device fingerprinting technology to track your referral campaign performance. You can dig into insights such as your app’s k-factor, cycle time, conversion through invite funnel, retention uplift, etc. The data helps you create an optimized user journey to increase in-app conversions and your overall retention rate.

Smart Invites allows your users to send invites via email, popular chat apps like WhatsApp, Kik, Kakao, Facebook Messenger, and even on social media, covering every possible medium that the modern user is active on. Additionally, your users don’t need to be authenticated with your app for inviting their friends. Removing this hurdle makes the process of inviting a user, intuitive, fast and more natural to the in-app journey of the user.

Personalization has been a game-changer. Even in referral marketing, people demand personalization. No one would click on a link that doesn’t seem to interest them or looks spammy. That’s why Smart Invites allows fully customized UI, localization in over 30+ languages, and branding of invite URLs with your own custom domain.

If you’re still using Firebase invite, it’s important that you switch now to GetSocial before you lose out on thousands of potential users. 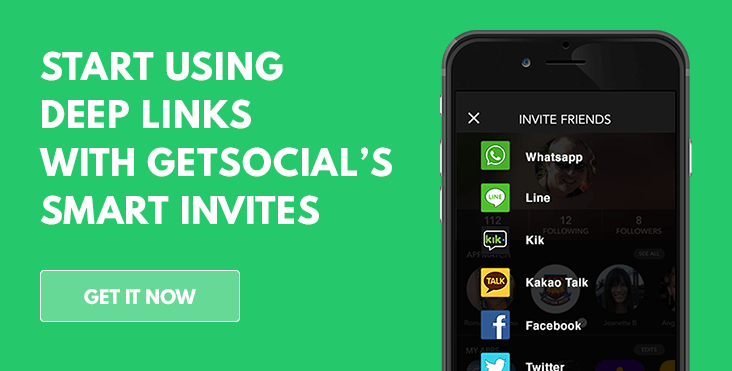