With Earth Day just a day away, Apple has begun a special initiative to raise money for the World Wildlife Fund. Apple users will now be able to help the cause by making purchases within some of the specially designated apps.

Starting from April 14 to two days after the Earth Day, April 24, all the proceeds collected during the duration from participating apps would go to the WWF – the organization that aims to protect natural resources through innovative and global solutions. 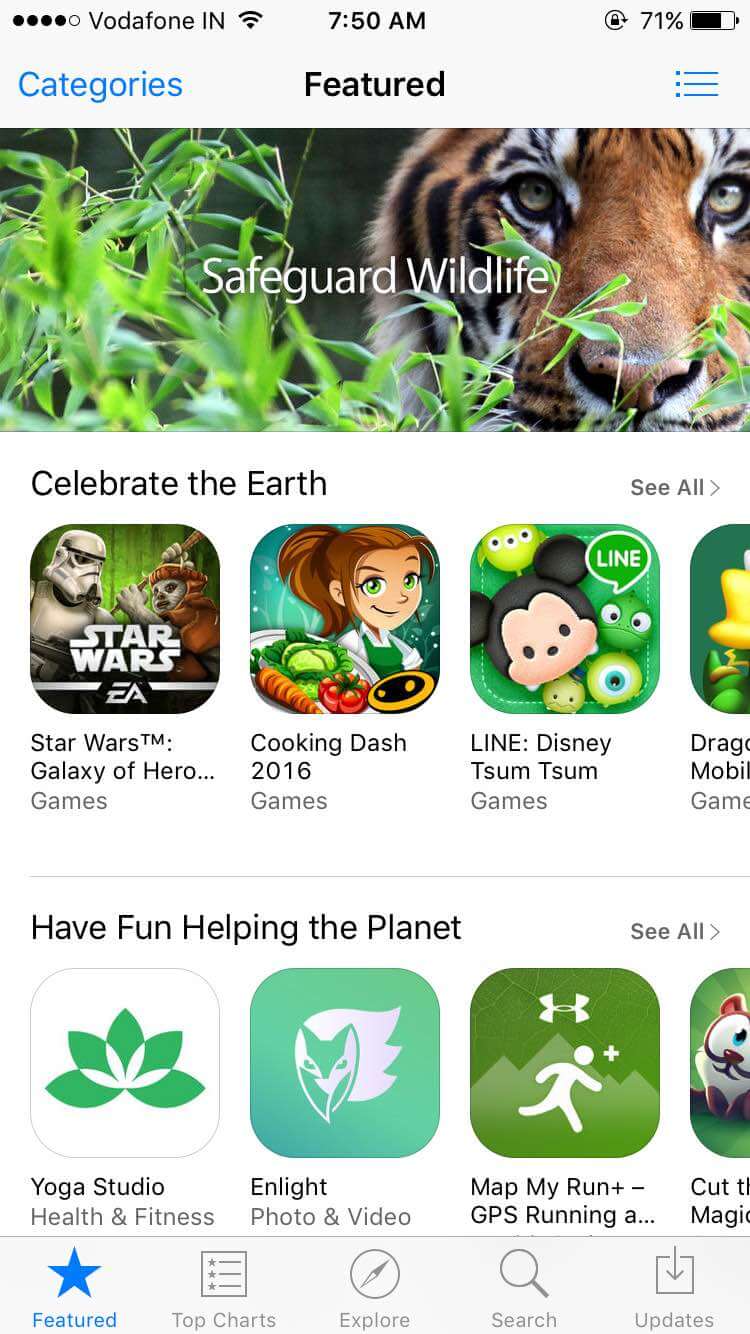 A lot many apps have also released updates to reflect their support in this cause. While some went ahead and introduced new features with environmental sensitive messages, there are those who are including exclusive content to raise money for the organization.

Here’s taking a look at some of the top games that are proactively participating in #AppsForEarth and what they are doing to show the same:

Angry Birds has introduced a limited time event that includes three exclusive levels and an all-new power up that is focused on protecting the oceans. The players are required to stop the popularly hated piggies from overfishing.

The piggies are at it again- let’s hope this time they learn… #AppsforEarth #AngryBirds2 @AppStore @World_Wildlifehttps://t.co/CKdktK3tbp

Candy Crush Soda Saga actually created a live in-game event to support #AppsForEarth. The event could be attended by players on April 15 and has another follow up on April 21. It wants players to participate in helping conserve the planet.

Cooking Dash introduced an all-new feature for players to enjoy – Eats for Earth. Here the players can prepare new dishes using sustainable ingredients with help from the waitress, Flo. The app is also offering some in-game purchases for special items that can help aspiring chefs experiment with their menu and yet, cook responsibly.

Inspired by the famous sneezing panda meme, Cut the Rope has introduced an all-new puzzle level where Om Nom transforms into an adorable panda. The exclusive level is created to aware people of the changes that the environment is facing and its impact on animals like their very favorite panda.

Kendall & Kylie has introduced an all new in-game quest and event that supports water conservation. Players can earn ocean-themed clothing, accessories and a lot more through the purchase on ‘water droplets’. Another feature introduced in the app, lets players take and share selfies from the exclusive WWF branded booth.

6. MARVEL Contest of Champions (Kabam, US)

Participating and encouraging its players to do the same, MARVEL launched a limited-time bundle offer called the ‘WWF Power Pack’. It includes a 3-start Hulk and a Go Green ticket that gives the players an access to a special in-game quest.

Help promote biodiversity and protect the environment! Through April 24th proceeds from the WWF Power Pack go to WWF pic.twitter.com/QcxBSPdUVx

Peak introduced a new level for its players to participate in the cause. In the level, they would have to guide Billy the Hawksbill turtle through the sea, dodging plastic wastes, fishing nets and other obstacles, while eating as much jellyfish as possible.

The games have actually personalized their in-app user experience to support the cause as well as encourage their players to do the same.

Apart from these popular games, another app that is proactively participating in the cause and caught our eye for being creative at it, is:

Line introduced a limited edition sticker set for its users to share and celebrate Earth Day. The stickers are not just to let its users participate in the cause actively, but also subtly nudge those in their circles to do the same.

While there are a lot many other apps that have introduced small changes to support the cause and participate in #AppsForEarth, we’re busy crushing over these! And would definitely nudge you to do the same.

What other apps that you love are participating and what’s the best effort you have seen so far?