With an average internet user being active on at least two digital channels for personal and professional use, social media has become an integral part of every app’s marketing and growth strategy. But not everyone has a clear plan when it comes to acquiring, as well as keeping their players engaged on social media. So let’s take a look at some creative ideas to target your game players on Facebook – one of our favourite social media channels!

According to Statista, the number of social media users will increase worldwide, from 2010 to 2020: 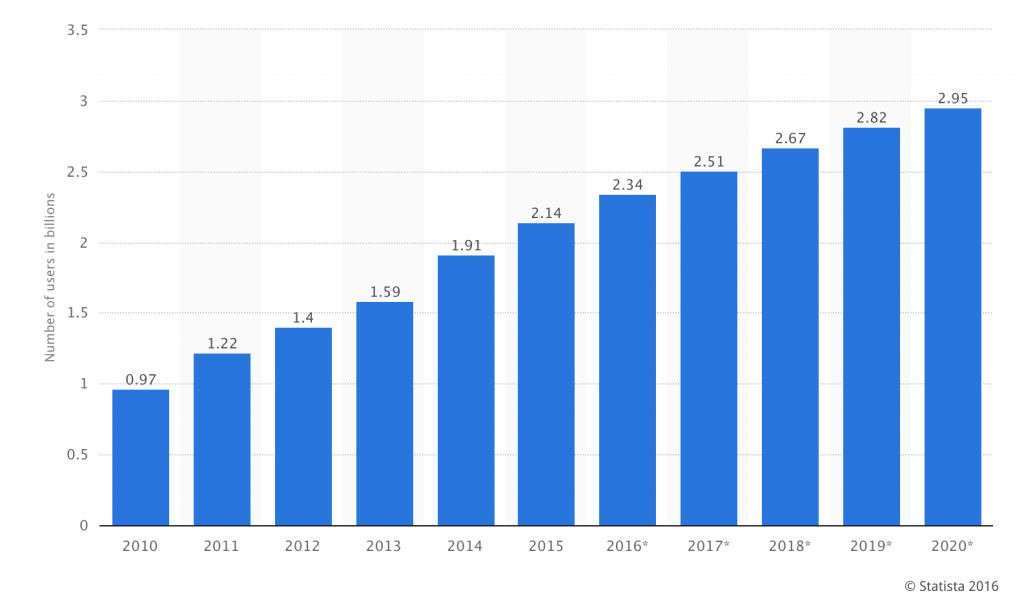 So if your game isn’t active on social media, you’re missing out on the biggest opportunity to acquire new players or even keep the existing ones engaged.

Most game developers and marketers believe that all they need is great game design to acquire and retain players. But the truth is, player engagement is what plays a big role in how long a user remains on the app.

We spoke about how game developers could use in-app chats, activity feeds and push notifications to keep their players engaged in-app.

Today, we’re going to share some creative ideas and inspirations that games can use to engage their players on the most loved social media platform – Facebook!

10 creative ideas to engage with your players on Facebook

The best way to keep your players engaged with your game, even when they’re distracted by all their friends check-ins, is to share trailers of new features. These trailers could be a sneak peek into a new level that you’re adding to the game soon or simply showcasing the current game play. 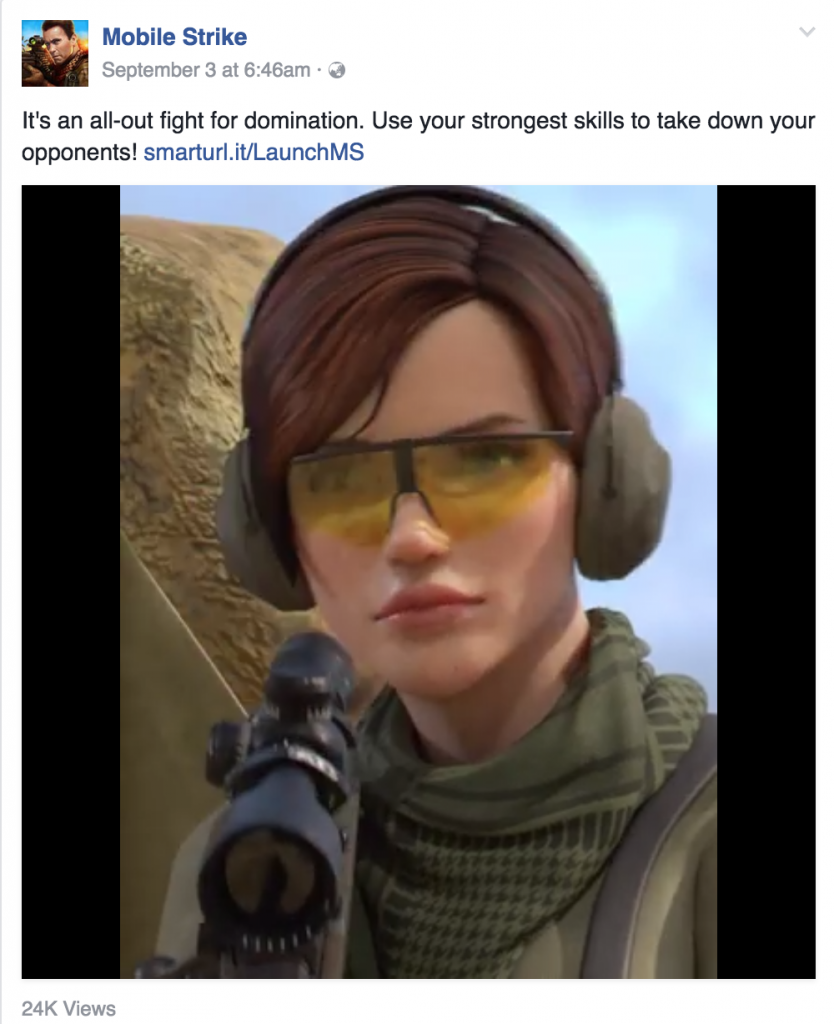 2. Give tips and tricks on how to win

Most of the times, players abandon games because they’re not progressing as quickly as the others. This is when a little bit of motivation, secret tips and tricks can come handy. If you’ve noticed a considerable number of players dropping off at a certain level, share a simple ‘how-to’. Let them know that the level is not unbeatable! 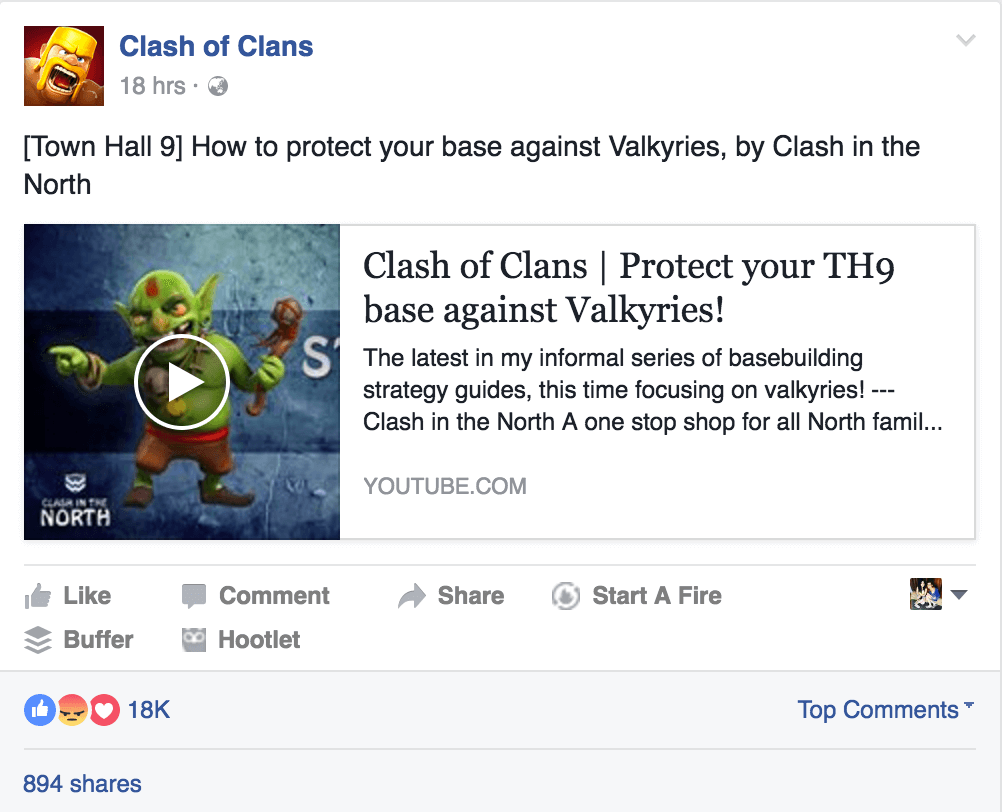 Clash of Clans educating their players

Alternatively, you could share links of community threads where the game is being discussed, along with a screenshot. This also lets your players know that you are available to show tricks and tips online. 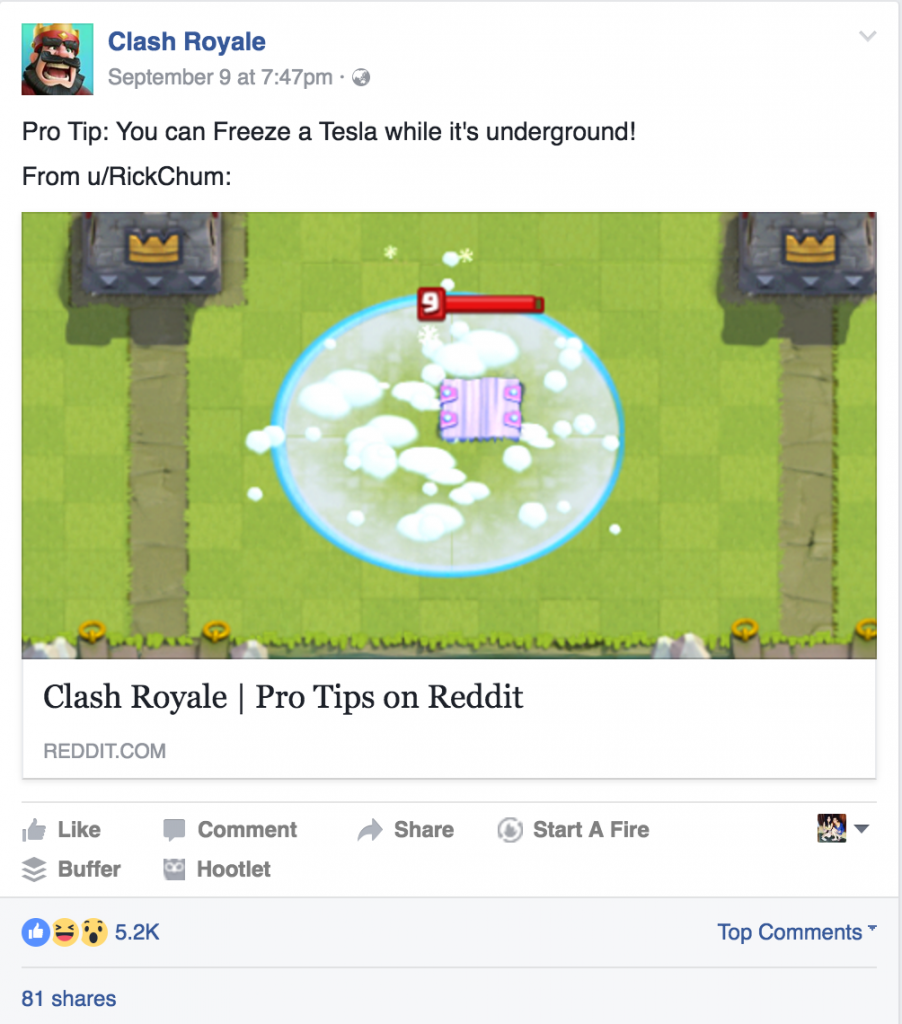 The one thing that drives engagement like no other, is a contest or a competition. When people know they would be winning something valuable at the end, they’re more likely to give it a try. After all, who minds winning something for playing a game? Host a FaceBook photo contest, e.g. create splashscreens for your game or share level achievements. You could also host a lucky draw and giveaway a few ‘coins’ to a few players! 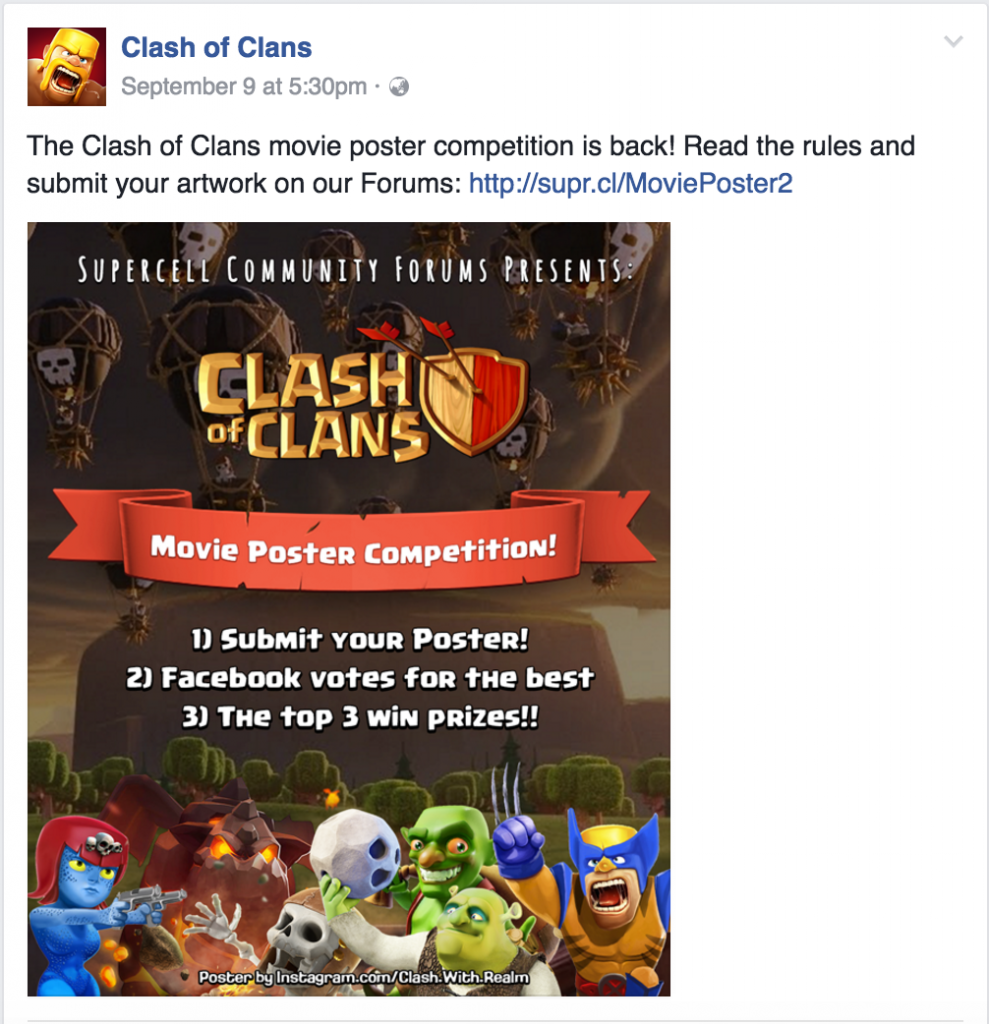 Or notify them on an in-app contest. 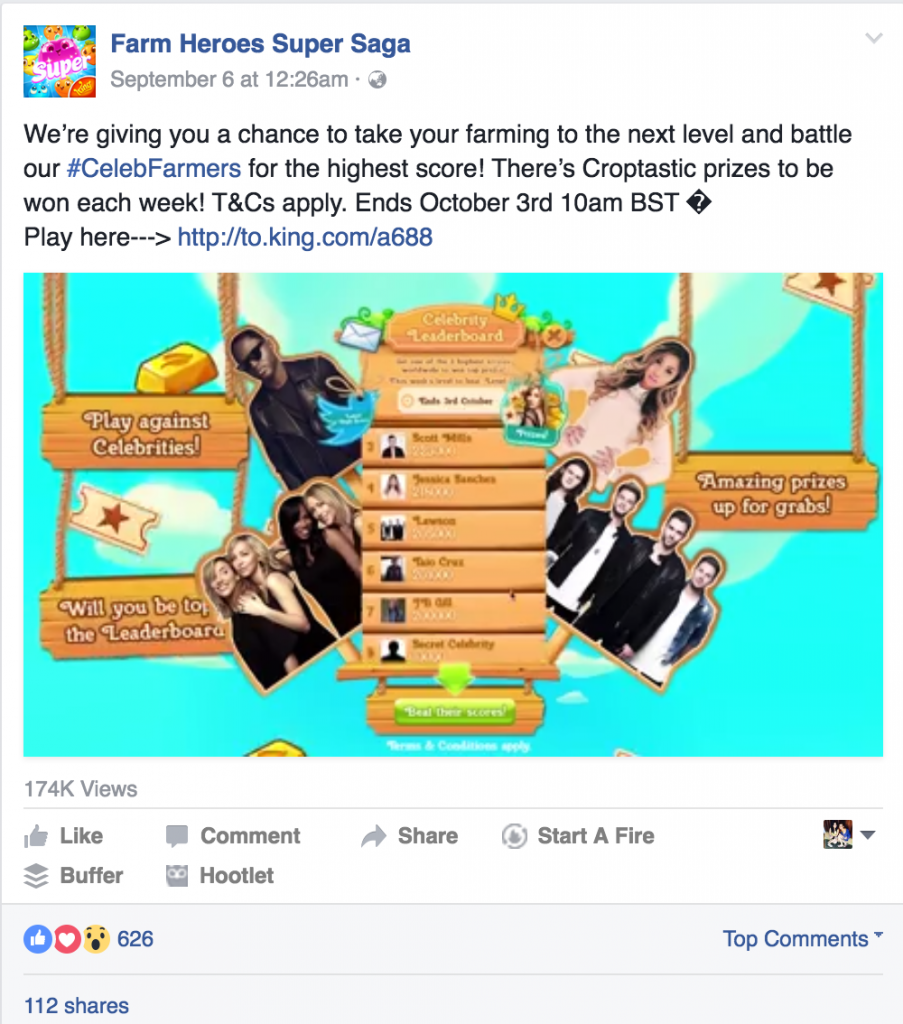 Now everyone knows how hooked players are to Candy Crush. They practically end up spending all their time completing levels – be it while short breaks during work, travelling or even when they’re in the bathroom! Well, it doesn’t change on weekends either. So create gifs that they would instantly relate with and even find it hilarious enough to share. 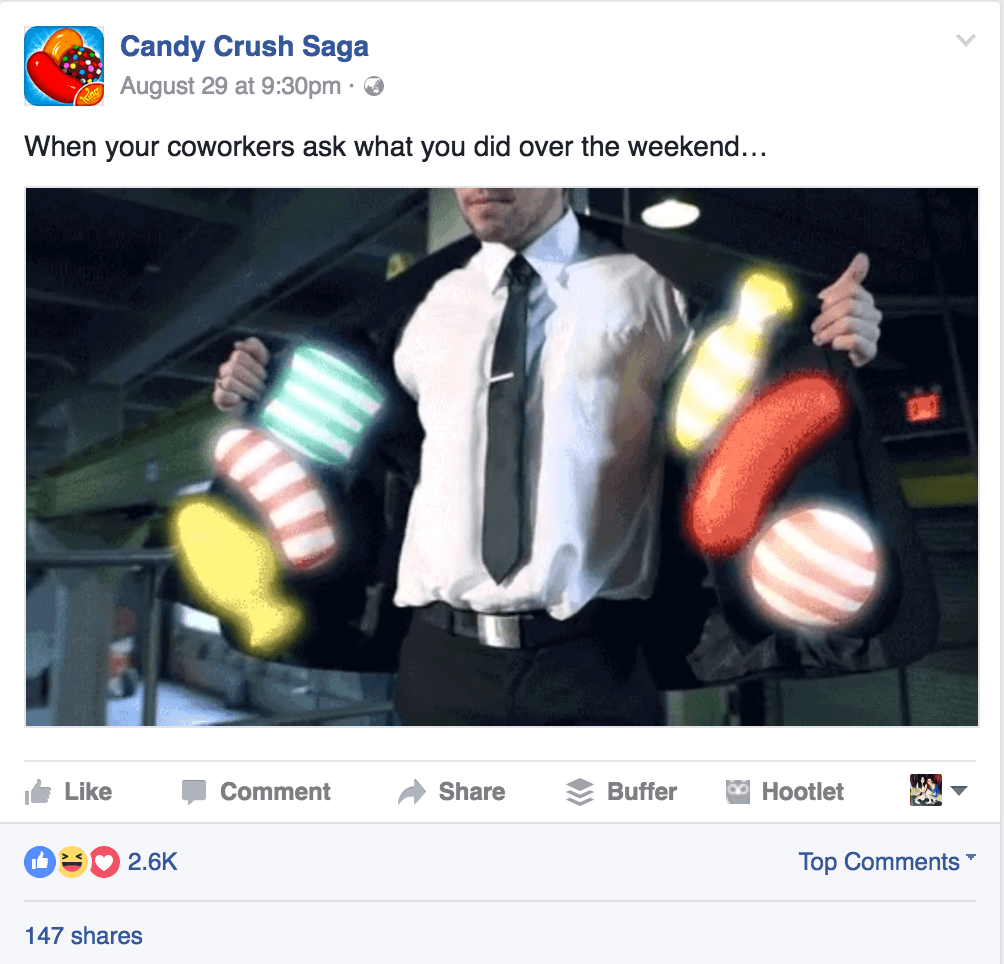 There’s a lot that goes behind creating a game and then consistently updating it to improving the gaming experience of players. That’s something you should definitely share with your users on social media. Let them know what goes behind the scenes, what made you think of that popular game level they recently completed. Being transparent is the best way to become their friend on social! 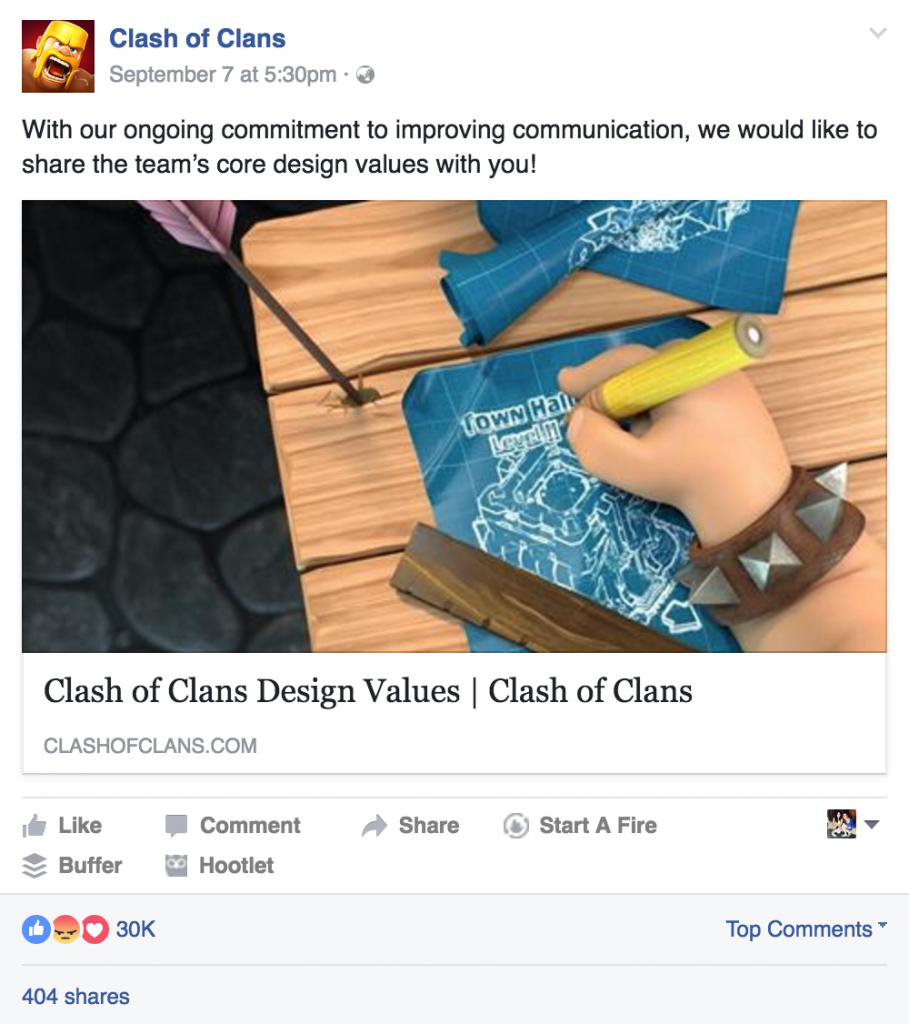 Clash of Clans sharing their values

6. Actively interact with your players

The primary goal of using social media is to engage with your players. So when they do interact with you on your Facebook posts, don’t forget to actively pursue those conversations! Make them feel like there’s a person behind the game. All the examples we’ve been sharing so far have hundreds of comments under them. Here’s how they interact with them – simple, yet communicative! 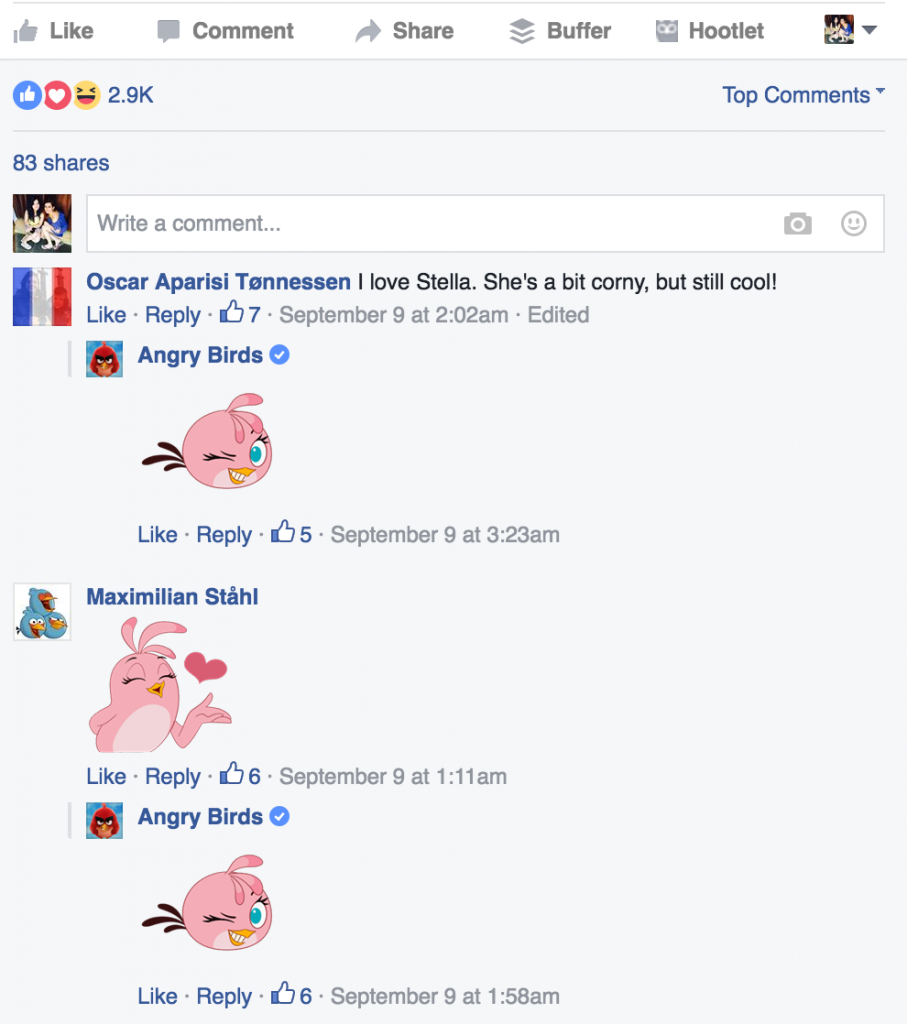 7. Never miss out on the important days

Make sure you don’t miss out on any of the days that are even slightly important to your players by leveraging what is trending online. For instance, we all know how seriously we take the dog day! 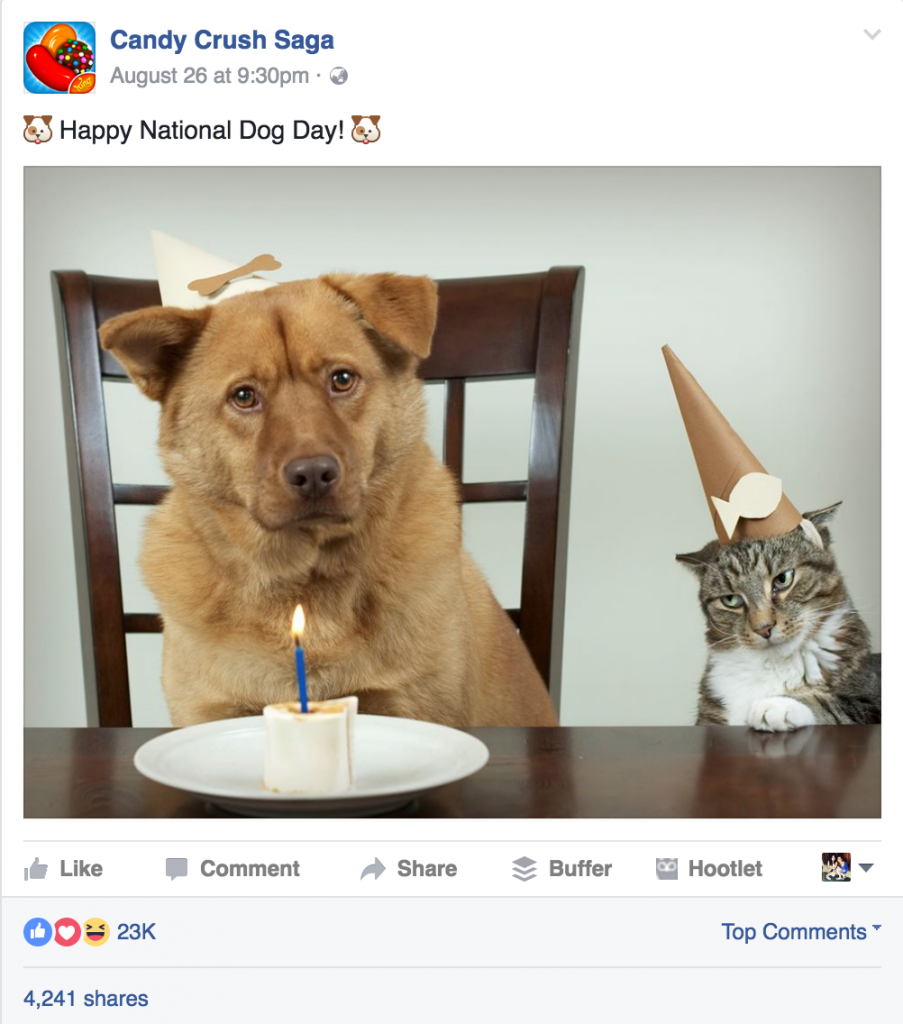 8. Cross promote your other games

If you have another game branching from the main one, why not use social media to cross promote them? This will let your players know that there is another game that might be interesting to them if they’re done with the existing one. It will also help you acquire more users for the new game easily. It is easier to convince existing players to try another game of yours than reaching out to players who are totally new to your game portfolio! 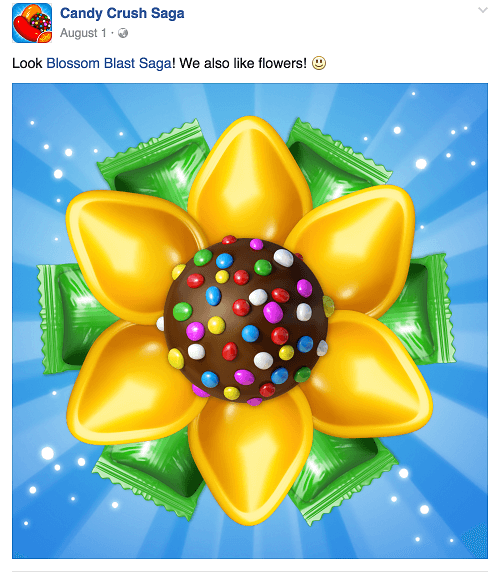 Hmm. Which Saga should I go for?

9. Listen to your players

The idea of updating your game frequently is to keep players hooked with what excites them. And the best way to know what they like, is to ask for their feedback. Share with them what you’re planning to bring as an update to your game and let them join the discussion as well.

For instance, notice here how the player has dropped a suggestion in the comment section below – to which, the game did respond with a thank you. There were thousands of other suggestions on the same thread! 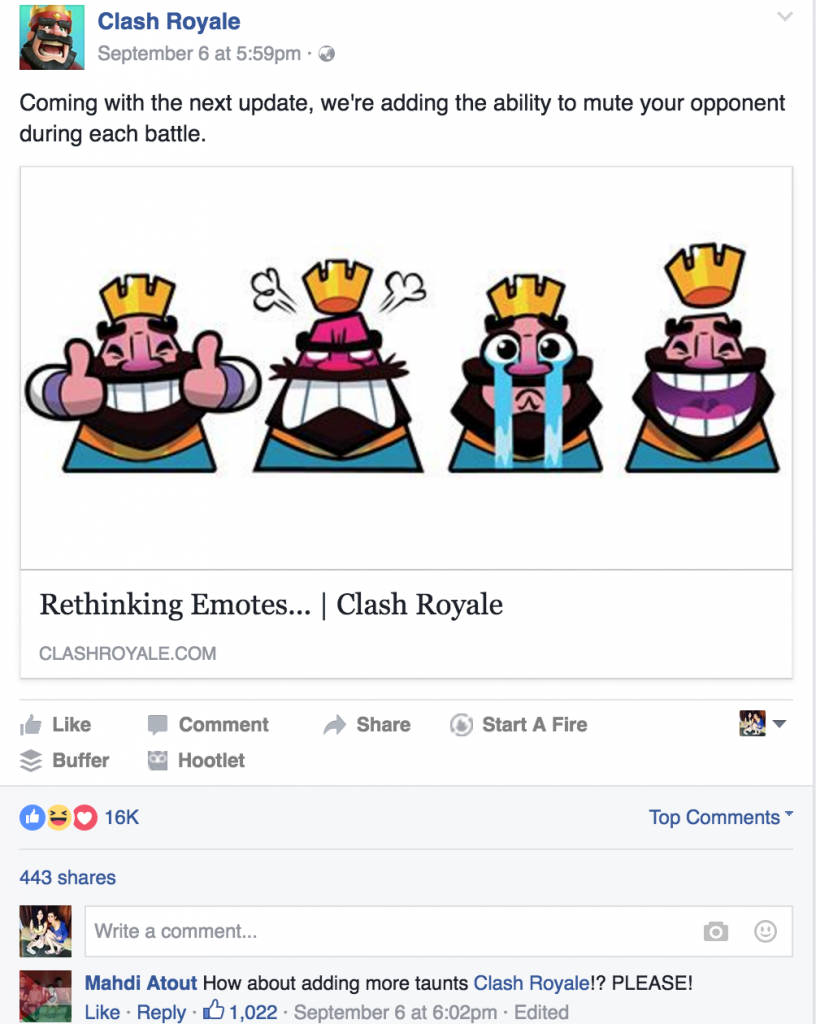 The idea of browsing through social media during work, travel and more is just to take a break from what’s happening around. So why not use your player’s break to share a laugh together? Create a meme about your game, share it on social. Let them know that you have a good sense of humor! 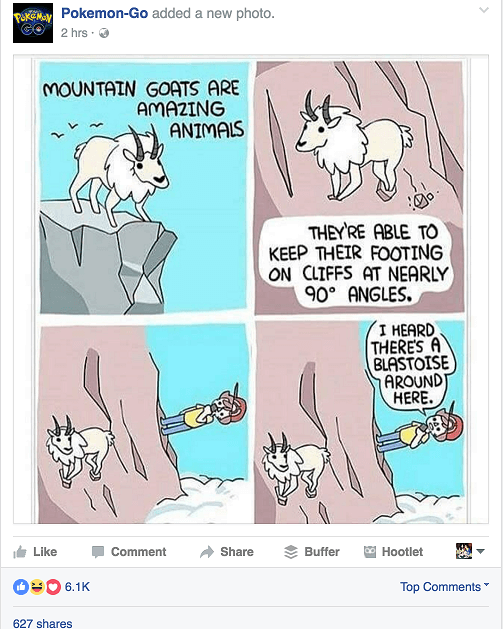 Facebook practically has millions of users active every given minute. It is important that games don’t lose this chance to engage with their players – before another game’s paid campaign or post interests them so much that they abandon yours.

Remember, keep it interesting and engaging because player engagement is the real measure of monetization for your game!

What other ideas do you think games can use to engage with their players on Facebook?